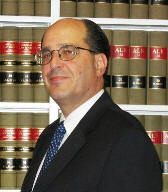 Michael Kalmus is of counsel to the firm and primarily practices in the firm’s New York City office.